If the music industry ever had a soul music visionary, that person was Ray Charles. Ray Charles helped integrate American music by creating a space for gospel-infused R&B music on pop radio. He was Atlantic Record’s most beloved R&B superstar and would go on to influence legions of musicians and fans throughout the years. A charismatic musician, songwriter and producer, Ray Charles helped define soul music as both a new musical genre and an instrument for social change in American culture.

Ray Charles Robinson was born on September 23, 1930, in Albany, Georgia, and he was raised in Greenville, Florida. He lost his sight at a very young age and had to rely on his ears thereafter to work and survive. He worked as a musician to make ends meet and taught himself classical music by reading compositions in Braille. He performed primarily as a stage musician in nightclubs and would go on to release records on Swing Time Records at the beginning of his career. By 1952, Ahmet Ertegun, founder of Atlantic Records, bought Charles’ recording contract from Swing Time for $3000. This unprecedented bargain solidified the beginning of a longstanding relationship between Charles and the label. While on Atlantic, Charles experienced much commercial success. In 1955, he achieved his first #1 single “I Got a Woman”. This success would be followed by other chart topping releases such as "This Little Girl of Mine", "The Night Time (Is the Right Time)", and “What'd I Say".

“When Ray Charles came along and did this radical, unheard of thing of taking gospel songs and putting the devils words to them, a lot of ministers and a lot of churches found this blasphemous.” - Jerry Wexler

Though Ray had proven to be a stellar recording artist, he was more than a piano-playing marvel. He helped usher in a new sound that would eventually be known as R&B. According to Jerry Wexler, an Atlantic Records executive and producer, Charles’ gospel roots helped him compose songs that were perceived as gospel music to “the devil’s words”. Though controversial at the time, this new sound would ignite popular culture and influence the youth of America, changing the fabric of race relations in the process. Charles had effectively taken the music of the underworld, consecrated it and made it safe for mainstream consumption. These were the beginnings of the soul music revolution.

“They had a rope between the races, a rope, something like a clothes line. There would be a card that said colored and white on each side [of the line]. As long as that rope was okay, you could dance.” - Ruth Brown

Ray Charles’ music was spiritual, sexual, youthful and true to the realities of life in America as told by the black American population of the United States. Consequently, Ray served as the ambassador for the sonic art of the “chitlin circuit” and helped expose the woes and cultural sensibilities of the struggling classes to mainstream society.

Ray’s artistic contributions became a form of political activism once he decided to take a stand against segregation in the South. By refusing to play venues that did not treat black patrons as equals or that employed Jim Crow tactics to unjustly separate the races, Charles helped lobby for race equality and civil justice in the States. Fellow Atlantic labelmate Ruth Brown once recalled the experience of playing dances in the deep, segregated South: “They had a rope between the races..something like a clothes line. As long as that rope was okay, you could dance.” Ray Charles would help change this. In 1961, he refused to play the segregated Bell Auditorium in Augusta, Georgia. He received criticism and legal fines due to his efforts, but the venue was desegregated a year later.

Ray Charles died on June 10, 2004. That same year the release of the critically acclaimed biopic Ray portrayed a man whose music was larger than life. Nevertheless, his life was subject to racial discrimination, marred by physical disability and riddled by emotional distress. This complex set of circumstances masterfully defines both Ray Charles and soul music, the marriage of the pain of the blues to the spiritually emancipating power of the gospel. Fortunately, Atlantic Records and its pioneering fathers had the foresight to partner with an artist like Ray Charles to bring soul to the world, the soul hidden at the core of American society. Check out the Spotify playlist "Ray Charles - The Genius!" below and share it online today! 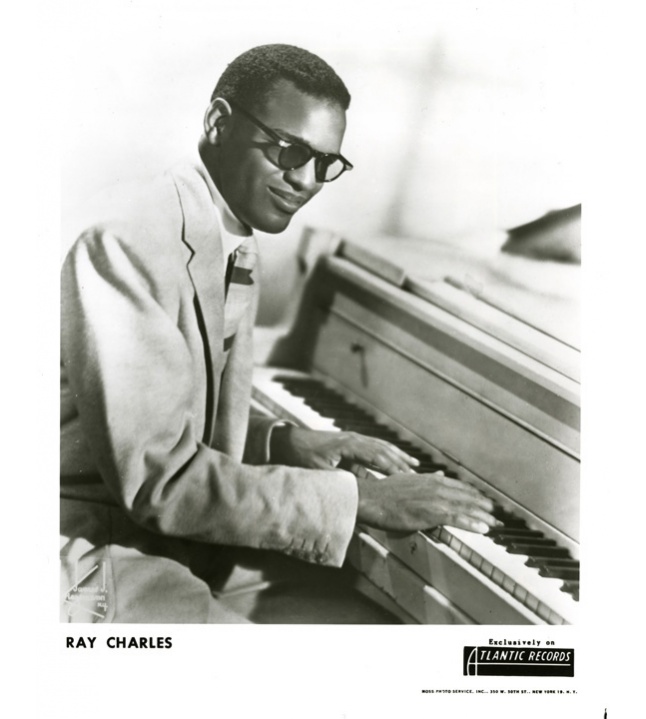 2013-12-04 14:48:41
Be one of the first to know about [ARTIST] tour dates, video premieres, and special announcements from [ARTIST].
* Required Fields
Close
* PLEASE ENTER A VALID EMAIL ADDRESS
PLEASE ENTER A VALID MOBILE NUMBER
* PLEASE ENTER A VALID POSTAL CODE
*
Submit
By submitting my information above, I acknowledge that I have reviewed and agreed to the Privacy Policy and Terms of Use, and I agree to receive updates and marketing messages from time to time from [ARTIST] and [its/his/her] record label. For SMS messages, I understand that message and data rates may apply, and that I may receive up to 2 SMS messages per week from [ARTIST]'s mailing list.